When discussing the state of current standardization I often find myself having to think through on how to summarize and simplify what a draft is about. I find that exercise very useful and I thought of providing a series of short summaries about the drafts the WG is currently working on.

The first of such documents is the Guidelines for HTTP-to-CoAP Mapping Implementations.

The point of the draft (soon RFC) is to describe how to do HTTP-to-CoAP Mapping to allow HTTP clients to access a CoAP Server via a proxy. This works under the assumption that, despite the similarities between CoAP and HTTP, not all browsers will implement support for it and that some legacy devices will need proxying. Another assumption is that users will like to use their smartphones with their home sensors. The set up would look like this: 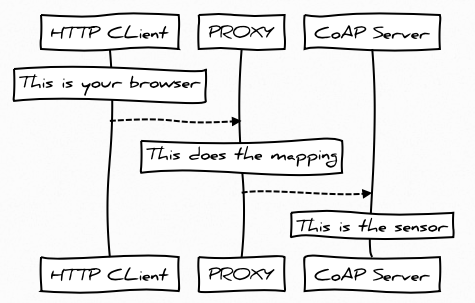 The mapping is fairly straightforward as CoAP is designed to mirror HTTP. In its simple form, you simply append one URI after the other, for example:

If you are using other mappings, you might do a search on ./well-known/core to discover them, they should be using resource type: core.hc and attribute type hct.

In the enhanced form more sophisticated mappings can be expressed. And certain template variables have been created for it:

The ABNF forms make use of RFC5234, RFC7252 and RFC6690, for simplicity you can check the list of CoAP-related ABNF forms I made. Thanks to all this, we can specify for example that we want to use secure CoAP and query for lights that are on.

Discovery is also important both on the HTTP and the CoAP side. A sample HTTP discovery on the proxy would look like this:

If it is the CoAP devices that are querying the proxy, they should also get back an anchor URI of the HC proxy as well as the URI mapping.

The mapping will depend on whether the application is tightly or loosely coupled with the proxy. For HTTP unsupported media types the HC Proxy should simply answer with a 415 Unsupported Media Type response. When dealing with an unrecognised CoAP “cf” the HC proxy can use the application/coap-payload and append that content format ;cf= whichever is the content format number.

Although possible, content transcoding is generally not advisable as it would tamper the payload and might cause loss of information (and mess other things in general).

At a really high level view, that is what the draft is about, if you are interested I really encourage you to read the draft, and if you want to use it there are several implementations available: